Meet and greet by our ever-welcoming tour guide.

Proceed for breakfast at restaurant.

It’s a sculpture that commemorates those who died in Malaysia's struggle for freedom, principally against the Japanese occupation during World War II and the Malayan Emergency, which lasted from 1948 until 1960.

Serves as the official residence of the supreme King of Malaysia, who relocated to Kuala Lumpur in 2011. The palace symbolizes an important part of Malaysia's heritage and is featured on the majority of Kuala Lumpur sightseeing tours.

Check In at Hotel & continue tour to:

Just like London’s four-faced clock tower, Malaysia has its own clock tower to boast of but with a clock on only one side, of course. Nevertheless, that doesn’t make the clock tower any inadequate but instead, the clock tower probably has more significance to shout about as it is situated next to the beautiful and historical Sultan Abdul Samad building. The building is named after the then Sultan of Selangor when the building was constructed.

It was here the Union Flag was lowered and the Malayan flag hoisted for the first time at midnight on August 31, 1957. Since then, Merdeka Square has been the usual venue for the annual Merdeka Parade (National Day Parade)

One of KL's newest tourist attractions. It is owned by ARCH, a Malaysian commercial concern which makes and sells 3D wooden pictures and models of famous landmarks from around the world and other gifts and collectables. It is an interesting tourist information center with a collection of paintings and photos of KL’s history, plus miniature mock ups of famous city landmarks. Set in a 114-year old, colonial-style building just beside Dataran Merdeka, this free museum is great if you want to find out a little bit more about KL’s history.

The oldest Hindu temple in Kuala Lumpur, Malaysia. Founded in 1873, it is situated at the edge of Chinatown in Jalan Bandar. In 1968, a new structure was built, featuring the ornate 'Raja Gopuram' tower in the style of South Indian temples.

It’s a single span steel structure bridge that is illuminated with 4,100 diamond facade panels that come with state-of-the-art LED lighting. It Is the most exquisite pedestrian bridge ever built in Kuala Lumpur.

Note: Itinerary may defer depending on arrival time.

Taman Negara is a vast national park in Malaysia on the Malay peninsula. It encompasses a sprawling tropical rainforest that's said to be 130 million years old. Kuala Tahan, the main entry point, is a base for the nearby canopy walkway, river trips and treks through the jungle to the top of Mt. Tahan

As its lush jungle is home to over 380 different species of bird, Taman Negara is undoubtedly the best place to go bird watching in Peninsular Malaysia. You don’t even have to go far to spot lots of brightly-coloured birds. The paths and trails around Wildlife Headquarters at Kuala Tahan, for instance, boast the Asian Fairy bluebird, Rhinoceros Hornbill, and Yellow-vented Flowerpecker, among many others.

Located at the main park headquarters is the Interpretive Room which is a great place to visit if you want to know more about the history of the park. There are a few exhibits here and galleries but one of the best features here are the videos that are played daily. The videos will fill you in on all the information you need to know about the diverse flora and fauna of Taman Negara National Park.

An equally memorable experience is going on a night walking safari around the park. As dusk falls and the sun sets over the rainforest, all types of nocturnal animals start to emerge, and the jungle has an entirely different look, feel, and sound to it in the dark. Accompanied by a guide, you can go on a wonderful trek through the wilderness from the Wildlife Headquarters

Transfer back to Resort 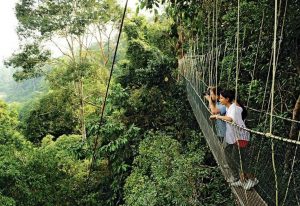 After breakfast at Resort,

Depart for a hike along the nature trail to Teresek Hill

Be at the top! View the superb panoramic of lowlands, hills, and mountains. Look at the rivers, spectacular grey-leafed Seraya trees in broad valley, Gunung Perlis and Gua Besar in Keniam. On clear days you can see Gunung Tahan, 2187M – height the highest peak in Peninsular Malaysia.

The canopy walkway is an iconic of Taman Negara, regarded as the world’s longest canopy walkway. This is a must do activity in Taman Negara and you should never miss to do it. This suspension bridge is built 530 meters long and 40 meters above ground level is one of the main attractions for local and international tourists to Taman Negara.

Return to the Resort for lunch.

After lunch, you will take a boat cruise to Lata Berkoh.

Lata Berkoh is a series of magnificent cascades across large boulders along Tahan River. This popular tourist attraction is accessible via jungle trail, but most visitors prefer to charter a convenient 20-minute boat ride upriver from Kuala Tahan that will park 1km away due to rocks.

Later, challenge yourself against the rapids of Tahan River.

Relax and enjoy the cascading waterfall and swim in the deep pool. Visitors usually disembark on shore and finish a moderately easy 10-minute jungle trek along the river banks to reach the waterfall.

Return to Resort for Dinner

Overland back to Kuala Lumpur