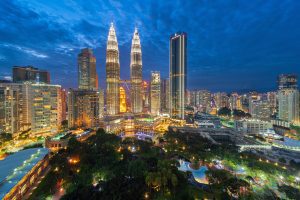 Meet and greet by our ever welcoming tour guide.

Proceed for breakfast at restaurant.

It’s a sculpture that commemorates those who died in Malaysia's struggle for freedom, principally against the Japanese occupation during World War II and the Malayan Emergency, which lasted from 1948 until 1960.

Serves as the official residence of the supreme King of Malaysia, who relocated to Kuala Lumpur in 2011. The palace symbolizes an important part of Malaysia's heritage and is featured on the majority of Kuala Lumpur sightseeing tours.

Check In at Hotel & continue tour to:

Just like London’s four-faced clock tower, Malaysia has its own clock tower to boast of but with a clock on only one side, of course. Nevertheless, that doesn’t make the clock tower any inadequate but instead, the clock tower probably has more significance to shout about as it is situated next to the beautiful and historical Sultan Abdul Samad building. The building is named after the then Sultan of Selangor when the building was constructed.

@Dataran Merdeka,situated in front of the Sultan Abdul Samad Building. It was here the Union Flag was lowered and the Malayan flag hoisted for the first time at midnight on August 31, 1957. Since then, Merdeka Square has been the usual venue for the annual Merdeka Parade (National Day Parade)

One of KL's newest tourist attractions. It is owned by ARCH, a Malaysian commercial concern which makes and sells 3D wooden pictures and models of famous landmarks from around the world and other gifts and collectables. It is an interesting tourist information centre with a collection of paintings and photos of KL’s history, plus miniature mock ups of famous city landmarks. Set in a 114-year old, colonial-style building just beside Dataran Merdeka, this free museum is great if you want to find out a little bit more about KL’s history.

@The Petronas Twin Towers, are twin skyscrapers in Kuala Lumpur, Malaysia. According to the Council on Tall Buildings and Urban Habitat's official definition and ranking, they were the tallest buildings in the world from 1998 to 2004.

Return to hotel to freshen up

It’s a single span steel structure bridge that is illuminated with 4,100 diamond facade panels that come with state-of-the-art LED lighting. It Is the most exquisite pedestrian bridge ever built in Kuala Lumpur.

Note: Itinerary may defer depending on arrival time.

An iconic and popular tourist attraction in Selangor. Site of a Hindu temple and shrine which attracts thousands of worshippers and tourists, especially during the annual Hindu festival, Thaipusam. Its main attraction is the large statue of the Hindu God Murugan at the entrance, besides a steep 272 climb up its steps to finally view the stunning skyline of the city centre. Paintings and scenes of Hindu Gods can also be seen in the Ramayana Cave.

Return to KL for dinner at restaurant.

Meal voucher per person is included.

Pick up and transfer to KL hotel at evening.

End of Tour & Beginning of Shopping

The oldest Hindu temple in Kuala Lumpur, Malaysia. Founded in 1873, it is situated at the edge of Chinatown in Jalan Bandar. In 1968, a new structure was built, featuring the ornate 'Raja Gopuram' tower in the style of South Indian temples.

One of the largest batik and handicrafts center in Kuala Lumpu. The process of waxing and dyeing cloth is known as ‘batiking’. So, batik is actually a cloth that is traditionally made using a manual wax-resist dyeing technique. The word batik is thought to be derived from the word ‘ambatik’ which means a cloth with little dots with the suffix ‘tik’ meaning little dot, drop, point or to make dots.

OE, which stands for Oeding and Erdel, has a history that harks back to 1906 in Muenster, Germany. OE’s specialty? Platinum and gold jewelry set with precious stones. Don’t miss out getting your hands on one of OE’s pieces from their KL showroom or stores.

Transfer to Airport for departure.