Cost for per person in Ringgit Malaysia :

Welcome to South India. Upon Arrival at Chennai Airport Drive to Tirupati. On Arrival Proceed to Hotel and Visit:

Kapaleeswarar Temple - is a Hindu temple dedicated to lord Shiva located in Mylapore.

Shanthome Church - San Thome Church, also known as St. Thomas Cathedral Basilica and National Shrine of Saint Thomas is a Roman Catholic minor basilica in Santhome, in the city of Chennai (Madras), India. It was built in the 16th century by Portuguese explorers, over the tomb of Saint Thomas, one of the twelve apostles of Jesus.→George Fort - Fort St George (or historically, White Town is the first English (later British) fortress in India, founded in 1644 at the coastal city of Madras, the modern city of Chennai.

Srikalahasti Temple - It is one of the most famous Shiva temples in South India, and is said to be the site where Kannappa was ready to offer both his eyes to cover blood flowing from the Siva linga before the Siva stopped him and granted him mukti.

Tirupati Sri Balaji Temple - a landmark Vaishnavite temple situated in the hill town of Tirumala at Tirupati in Chittoor district of Andhra Pradesh, India. The Temple is dedicated to Venkateswara, an incarnation of Vishnu, who is believed to have appeared here to save mankind from trials and troubles of Kali Yuga. Hence the place has also got the name Kaliyuga Vaikuntham and the Lord here is referred to as Kaliyuga Prathyaksha Daivam.

Padmavathy Temple - Padmavathi Temple is the temple dedicated to Goddess Padmavathi or Alamelumanga, the consort of Lord Venkateswara.

Tiruttani Murugan Temple - It is one of the Arupadaiveedu, the six holy abodes of Lord Muruga.

Later Drive to Kanchipuram. On Arrival and Visit:

Ekambareshwarar Temple - is a Hindu temple dedicated to the deity Shiva, located in the town of Kanchipuram. It is significant to the Hindu sect of Saivism as one of the temples associated with the five elements, the Pancha Bhoota Stalas, and specifically the element of earth, or Prithvi.

Kanchipuram also known as Kānchi (kāñcipuram; [kaːɲd͡ʒipuɾəm] or Kancheepuram, is a temple city in the Indian state of Tamil Nadu in Tondaimandalam region, 72 km (45 mi) from Chennai – the capital of Tamil Nadu. The city is particularly important to Sri Vaishnavism, but is also a holy pilgrimage site in Shaivism. The city is well known for its hand woven silk sarees and most of the city's workforce is involved in the weaving industry.

Tiruvannamalai - Located on the foothills of Annamalai hills, Tiruvannamalai has been ruled by the Pallavas, the Medieval Cholas, the Later Cholas, Hoysalas, the Vijayanagar Empire, the Carnatic kingdom, Tipu Sultan, and the British.

Arunachaleswarar Temple - also called Annamalaiyar Temple, is a Hindu temple dedicated to the deity Shiva. It is significant to the Hindu sect of Saivism as one of the temples associated with the five elements, the Pancha Bhoota Stalas, and specifically the element of fire, or Agni.

Ramanamaharishi Ashram - The temple dedicated to Lord Siva and here he represents [Fire] one of the five elements of Universe [Panjapothasthalam].

After Breakfast, Proceed to Pondicherry. On Arrival Visit:

Auroville - Auroville is a universal city in the making in south-India dedicated to the ideal of human unity based on the vision of Sri Aurobindo and The Mother.

Manakula Vinayagar Temple - Dedicated to the god Ganesa, it is a popular pilgrimage site and tourist destination in Puducherry.

Chunnambar Boating - The 20 min journey to paradise beach is really exciting and filled with fun. I would say that the backwaters and the paradise beach are heaven for fun-lovers including photographers, sports-lovers and even family outing. 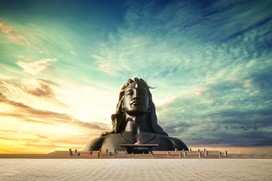 Morning after breakfast, Proceed to Visit:

Later Drive to Kumbakonam. On Arrival and Visit:

Thirunallur Temple - Kalyanasundaresar Temple, or Thirunallur is a Hindu temple dedicated to the deity Shiva. Shiva is worshiped as Kalyansundaresar, and is represented by the lingam. His consort Parvati is depicted as Girisundari.

Swamimalai Murugan Temple - Swamimalai Swaminathaswamy Temple is a Hindu temple dedicated to god Murugan. The temple is one of the six holy shrines of Murugan called Arupadaiveedu.

After Breakfast, Proceed to Palani. On Arrival Visit:

Murugan Temple - Arulmigu Dandayudhapani Swami Temple is one of the Six Abodes of Murugan.

Later Drive to Madurai. On Arrival and Visit:

Meenatchi Amman Temple - is a historic Hindu temple located on the southern bank of the Vaigai River in the temple city of Madurai, it is dedicated to Meenakshi, a form of Parvati, and her consort, Sundareshwar, a form of Shiva. The temple is at the center of the ancient temple city of Madurai mentioned in the Tamil Sangam literature, with the goddess temple mentioned in 6th century CE texts.

Tiruparankuntram Murugan Temple - Thiruparankundram Murugan Temple is the first among the 6 Padai Veedu Lord Muruga Temple. It is located in the outskirts of Madurai City. This temple is considered very auspicious for conducting marriages, since as per the mythology it is here the divine marriage of Lord Murugan and Goddess Deivanai took place.

Tiruchendur Murugan Temple - It is one of the six major abodes, or sacred temples, of the Kaumaram religion. Soorasamharam, a reenactment of the victory over Soorapadman.

Return Back to Madurai and Overnight Stay at Madurai.

Palamuthi Cholai (Arupadai Veedu) - Pazhamudhircholai Murugan Temple is the sixth among the Arupadai Veedu Lord Muruga Temple. It is located in Madurai City, Tamil Nadu. It is also known as Solaimalai Murugan Temple, situated atop of hill known as Vrishabhadri or Idabagiri, and is surrounded by dense forest.

Later Drive to Thekkady. On your way, explore:

Chinnakanal Viewpoints - is a village in Idukki district in the Indian state of Kerala. The waterfalls here are popularly known as Power House Waterfalls.

Anayirangal dam - is a lush green carpet of tea plants. A trip on the splendid reservoir is an unforgettable experience. The Anayirangal dam is surrounded by tea plantations and evergreen forests.

Spice Plantations - The spice plantations in Thekkady is famous for nature walking. You can also spot many unique birds that visit the plantation for food. You can taste fresh spices from the plant.

View Points - is famous for a stunning view of hilly terrains covered in lush green vegetation and an enchanting waterfall. The viewpoint has a watchtower with a telescope installed on a terrace which allows tourists to get a splendid bird's eye view of the picturesque location and the mesmerizing sunset.

Periyar wild sanctuary boating – Periyar lake boating experience is one of unique among all boating while in Kerala. Here the steamer will take you to the ride for 45 minutes inside the lake where you can see lots of birds and other species in nearby Periyar Park.

Arrive Thekkady and Check in to your Hotel. Later visit: Spice market & enjoy evening cultural activities like Kathakali & Kalarippayattu at your Own Cost.

After breakfast at hotel, we proceed to

On the way, visit:

Green tea plantation - a place known for its beautiful tea estates and tea cultivation. No one will return home without tasting or shopping the tea essence of Munnar.

On arrival at Munnar, check in at hotel. Later, visit the:

Tea Museum - showcase some of the exquisite of tea plantations in Kerala.

We head towards Munnar town, a beautiful hill station, which was the summer resort of the British. Take a stroll around town and shop.

After sightseeing, proceed to hotel and dinner at hotel.  Overnight at hotel.

St Francis Xavier’s church - a parish church coming under the Diocese of Kottapuram of the Archdiocese of Verapoly.

Chinese fishing net - Known as Cheenvala and Vasco da Gama Square is the best spot .to get the perfect view of these massive structures.

Jewish Synagogue - One of seven synagogues of the Malabar Yehudan or Yehudan Mappila people or Cochin Jewish community in the Kingdom of Cochin.

Museum - Kerala Museum at Edapally, Kochi, India, is one of the oldest art and history museums in Kochi.

Marine Drive - Marine Drive is a picturesque promenade in the city of Kochi, Kerala, India. It is built facing the backwaters, and is a popular hangout for the local populace. Ironic to its name, no vehicles are allowed on the walkway.

After breakfast, full day free at leisure and shopping. Later on time you will be transferred to Cochin airport for you’re onwards flight Journeys with Sweet Memories.